For this year's "spooky season," I decided to risk my life for this article, touching a statue that holds many terrifying legends in Iowa City, the Black Angel. 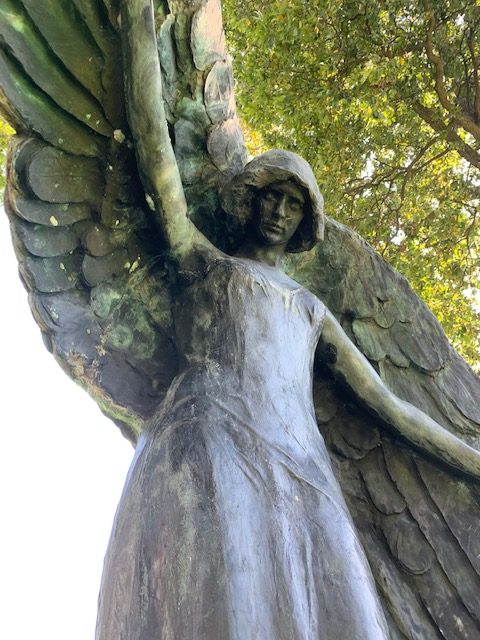 The Black Angel is one of Iowa's most famous haunted statues.

North on Governor Street in Iowa City. Left at Brown Street. Then, head into the Oakland Cemetery. Follow the main road, stick mostly to the right. Before you know it, an 8 ½ foot tall woman with her harrowing wings will appear about halfway back in the cemetery beneath a street lamp. This particular location it seems is of modern-day folklore for Iowan’s. The Black Angel, as legend has depicted her, stands guard over the graves of Theresa and Nicholas Feldevert, as well as Theresa’s son from her first marriage, Edward Dolezal. Due to how this angel was designed, it oxidized from an original bronze into a mysterious black. Because of this, years of legends have surrounded the structure.

One of the most haunting legends is that if you touch or kiss the angel you will die instantly, or be struck down by a catastrophe soon after, unless you’re a virgin of course, or as I told my little cousins, “young and pure.” These warnings have done little to deter the angel’s visitors though. Reckless thrill-seekers venture into the cemetery to break off the woman’s fingers to see just how true the legends hold. Due to this, the structure is heavily watched for its preservation. So the pressure is on to be respectful as I trek into the yard of graves to kiss the angel.

Upon entering Oakland Cemetery I felt nothing out of the ordinary. Though, driving down the narrow roads, my younger cousins Peter and Isaac grew quiet. Before abruptly yelling, “I see her!” Isaac shouted. Pulling over the car, the boys and I peered out the window at the statue. Still, I felt nothing, she didn’t seem as menacing as all the stories portrayed her, at least not until we had approached her. Staring up at her, those lifeless eyes seemed to meet mine.

Respectfully, we stayed away from the concrete slab that covered Theresa’s grave as we went in to touch her. I remember shuddering as she towered over me. The little boys weren’t too excited about her either now that we were up close. We counted down, “1. 2. 3.” Each placing the palm of our hands upon the base of her statue.

Then… nothing. We all remained alive, no lightning striking down to remove us from the Earth. So we drove home. Feeling no different than when we had first arrived. Will the legend reign true? We’ll have to wait and see.