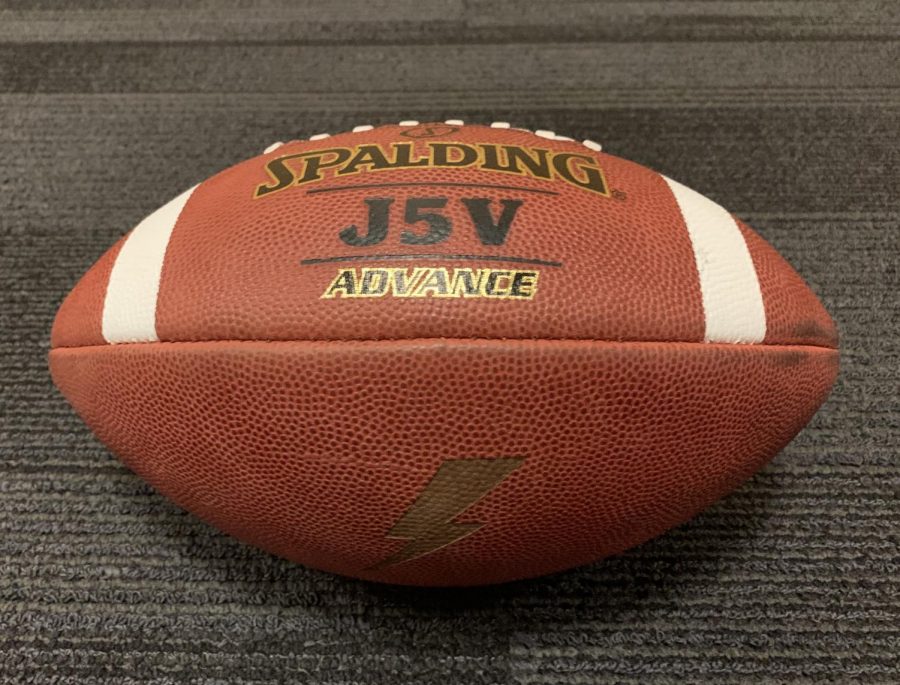 OpEd: Should College Athletes Get Paid?

Each year there is a “once in a generation” athlete that comes out of high school, and everyone in the country wants him/her to represent their college or university in their specific sport. Some of these athletes are wanting to be paid when their likeness, or name, is used. ‘Likeness’ refers to a player's name and is when a brand uses their name or picture to earn monetary funds through advertisements.

They Shouldn’t Be Paid

Each year there is a “once in a generation” athlete that comes out of high school, and everyone in the country wants him/her to represent their college or university in their specific sport. Some of these athletes are wanting to be paid when their likeness, or name, is used. ‘Likeness’ refers to a player’s name and is when a brand uses their name or picture to earn monetary funds through advertisements.

Some college athletes want to be paid to play their sport.

“I think they should be paid,” said Ex- NFL player Patrick Kerney.

Some of these big-name athletes are upset and frustrated that they aren’t getting paid, but in reality, most of them have received full-ride scholarships, which could be viewed as a form of payment for their performance. Having zero debt coming out of college and most likely going professional to be paid millions and millions of more dollars.

When the school uses the players’ likeness, athletes are mad they are not getting paid. When colleges and/or universities sell jerseys or shirts with an image of them on it of these players, the money goes to the school. These funds go into upgrading the schools, improving facilities, and continuing to advance the athletic programs.

When an athlete commits to a school, they become a part of it. The athletes chose that school because they liked it the most out of all the other schools they were getting recruited by. The schools have a right to the athletes’ likeness because they committed to playing for that school.

“I don’t think athletes are being exploited. I think there’s a symbiotic relationship there. Without the university platform for them to compete, there is no exposure for them. None. So that experience alone and that opportunity creates the platform for them, for visibility,” said Judy Rose, athletic director of the University of North Carolina at Charlotte. “I just think the money issue has clouded what the real purpose is, regardless of where the money is coming from and how much is coming in. I want the whole story to be told about the value of an education and put dollars to that.”

Concurrent with this argument is whether or not schools should profit from sports games such as NCAA 14. Even though it is seven years old, the game is still popular and relevant today. However, Electronic Arts (EA) had to discontinue the series in 2014, because players were unhappy they were not being paid for their representation in the game. Some collegiate athletes have taken EA to court over this and won, and EA had to pay millions.

There is a lawsuit known as the “Ed O’Bannon case”. O’Bannon was a former UCLA basketball player. He filed a lawsuit against the NCAA and EA. He argued that student athletes should be compensated when their likeness is used in video games. O’Bannon won the case and EA had to pay 40 million

To me, suing a company that puts you in a video game is ridiculous because who doesn’t want to be in a video game? I would consider being in the game as extra media coverage making me more employable and desirable to the NFL and other potential sponsors.

This was not illegal either. EA had to email or go to schools to get their permission to have that specific college team in the game. Former collegiate athletes have sued EA for their character “look[ing] too much like themselves”. The case ended with the players winning and EA paying them millions. From my perspective, EA was simply doing its job. When a collegiate athlete whines about not being paid, it makes the rest of the team want to be paid. It causes a domino effect. If you pay one athlete, then you have to pay for the rest of the team. When you pay one team, then you have to pay for all the other teams.

Paying all these athletes is not going to be cheap. The result of this is that the school will probably have to raise tuition and sports paraphernalia costs in order to break even. They might even have to discontinue some of its sports.

This is all on top of all the money the school pays to keep the school running.

“There’s no more money. Everybody is working as hard as they can to generate as much revenue as humanly possible and all, but a handful of schools operate in the red,” The University of Texas athletic director, Steve Patterson, states.

Running a college is not easy. Everyone wants the latest thing that came out. Take one look at Iowa, one of the top medical schools in the U.S. The equipment that they have in a single room costs hundreds of thousands of dollars. If college athletes get paid, the only sports colleges would be able to afford are football and basketball because they draw in the most money. The sports that produce the most money would be the only sports competed.

When you are in a collegiate sport, you also get many bonuses. The amount of gear you get is insane. It’s all-inclusive. You get whatever you need:  free cleats, free gloves, free accessories. On top of that, you receive all the apparel. Then if your team does make it to a bowl game you get even more gear.

You get top of the line facilities. If college athletes were being paid, schools wouldn’t be able to do renovations like the University of Texas’s locker room.

College athletes wanting to be paid is like a slap in the face to the college. You are a college athlete. You don’t go to college to get paid; you go to college to get an education and a degree. These big name athletes want to be compensated, even when they have a full ride scholarship. They are coming out of school with zero debt. There are people that come out of school with 50,000+ dollars in debt, and these athletes are upset because they are not getting paid.

They Should Be Paid

According to a recent study with college athletes, 71% of the athletes voted that they were in favor of letting colleges compensate their student-athletes. Athletes risk lots of things in their lives to become what they all have dreamt about since they were little. They do everything they can to be the best.

One of the best parts of being a college athlete is the love and passion the students have for their sports and school. They leave everything out on the playing field for their school. But a lot of times, student-athletes suffer very harsh injuries with some being career-ending. Not only is their life goal out of the picture, but this could also affect their everyday life. For example, a torn ACL could cause a limp, whereas a really bad concussion could cause chronic traumatic encephalopathy (CTE), which is a progressive brain disease commonly found in athletes who have repetitive brain trauma. 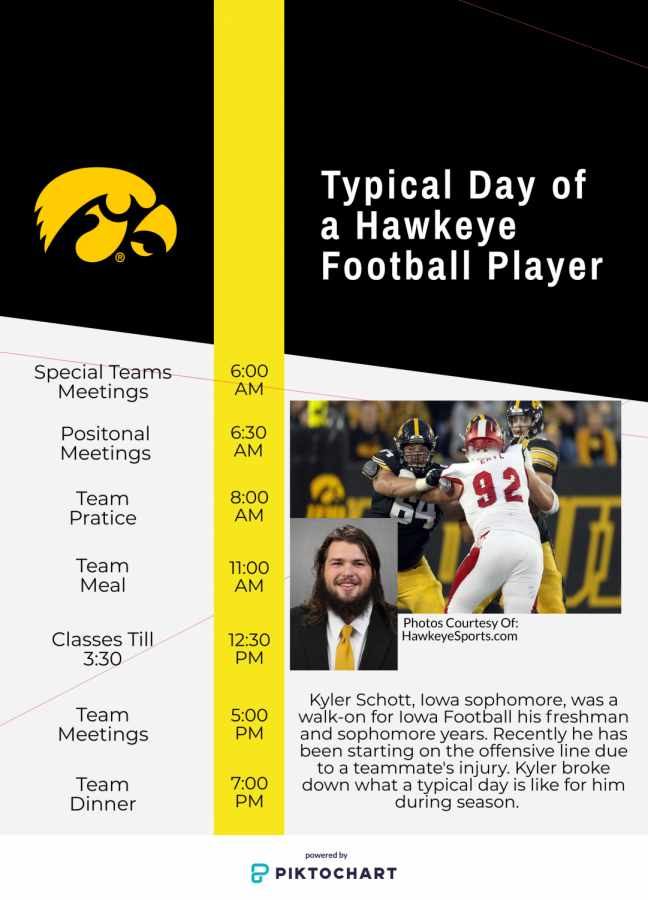 “A huge difference between high school and college sports is how demanding it is on your body, so one thing you really have to focus on, is recovering. Everybody has their own way of how they do this; I like to sit in the hot tub and ice bath to recover for the next day where you do it all over again,” Schott said.

A stat from the NCAA shows that 7.4% of all college injuries are concussions. These athletes are putting their careers and bodies at risk every time they step foot on the playing field for every practice or game. They deserve to be paid for the serious health risks they are taking.

Student athletes are still students, and most players are in college for education, not sports.. They are spending more time in practices, workouts, and team meetings than some people spend working each week in a normal job.

“During [the] season, we start [practice] at 6 am and go until around 11:30, then come back at 5 for 2 more hours of meetings and dinner,” Iowa football player Kyler Schott said.

These athletes are basically working a full time job while also taking classes.

“I’m currently taking 13 semester hours, which is around what the regular student takes. Athletes have a building that we can use to study and free tutors are provided if asked for,” Schott said.

These sports are bringing in millions of dollars for their schools. The NCAA basketball March Madness tournament brings in almost $900 million just by itself. More recently the college football playoff brought in a lot more money as well. Some schools like Texas A&M bring in almost 200 million dollars a year just from their school.

While spending 7-8 hours each day with the team, all the workouts and practices really take a toll on the athletes bodies. Athletes need to take care of their body each and every day to be ready for the same thing the next day.

“A huge difference between high school and college sports is how demanding it is on your body, so one thing you really have to focus on, is recovering. Everybody has their own way of how they do this; I like to sit in the hot tub and ice bath to recover for the next day where you do it all over again,” Schott said.

OpEd: Should College Athletes Get Paid?