We all know of the recent absence from the English department. Fortunately, Liberty found a replacement in perfect timing, and the qualities and skills that the newest teacher added were exactly what Liberty needed. 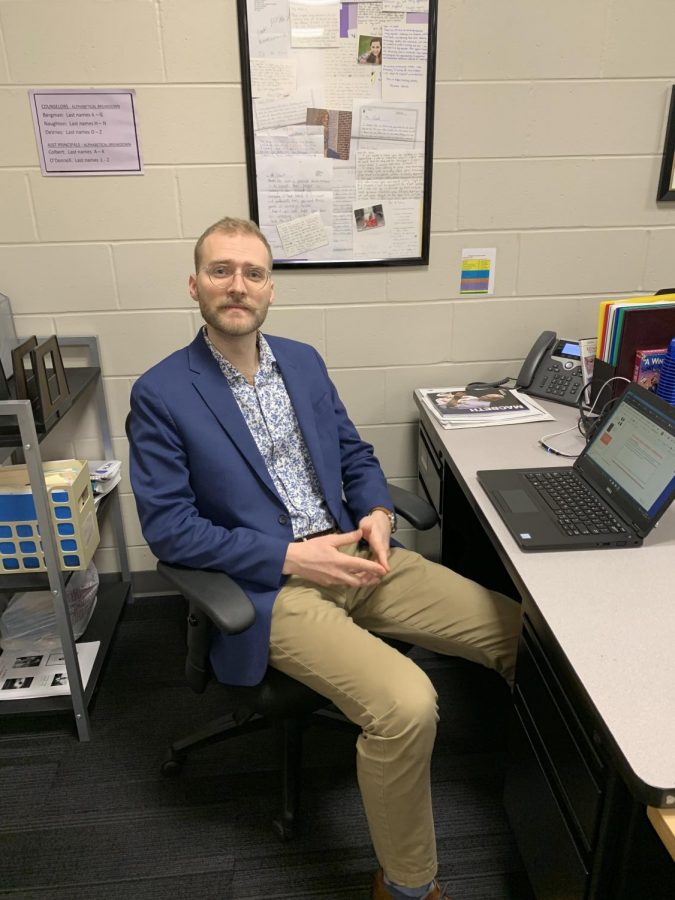 Two weeks before the end of the first trimester, Brad Borrison, English teacher, resigned, leaving his classes and students behind. Unfortunately, that left the Liberty English department and over 60 kids out of a teacher.

“I think a lot of his reasons for leaving are personal,” said Peggy Dolson, the head of the English department.

Not knowing what happened, the students were wondering what will come out of this situation. Thanks to the impressive and mature leaders of the English department, the teacher hunt started in full swing while classes were still on, as learning was the priority.

“I also felt responsible when he left that those students were served,” said Dolson.

While looking for a teacher, students still needed to learn. Lesson plans were needed for the students that went along with where they were, and English teachers came together to discuss how to give them assignments and plans.

“It was very stressful because it was at the end of the trimester, but the English department was fabulous. Everyone stepped up,” Dolson said.

Teachers stepped up and took over classes and discussed how to keep the classes on track; Borrison’s British literature, English 10, and acting classes were well kept, and the student’s learning was never hindered.

In the 33 years of her teaching career, Dolson had never seen a case when a teacher had left in the middle of the year during the end of the trimester. A new teacher was needed, and Dolson and others started looking for new teachers or possibly even a long term sub to fill the role right away. The hiring process isn’t easy, and Liberty needed a teacher to fill this role pretty quick.

“It starts with a resignation, so then you can post it and take applicants, and look through them, and call in for interviews and discuss,” said Dolson, explaining the process of hiring a new teacher.

Fortunately, they found a perfect fit for all their requirements. Darien Robins, the new English teacher, was already known as the building sub at North West Junior High School.

“It went surprisingly well, and Liberty High School is blessed with the teacher we were able to hire. Not only is he knowledgeable and organized, but he is very kind, he wants to help students, and he has got his own quirky sense of humor. He’s seamlessly fit into the English department,” said Dolson. “We really got lucky.”

“He (Robins)  is a really good teacher and he is pretty cool,” Armstrong added.

Nick Borchert, English teacher, was a student with Robins in college. The two are very fond of each other.

“He (Robins) is really thoughtful and committed to justice. I was really excited when he was available because he would be a great resource to our students,” said Borchert.

“He cares a lot about inequality and problems people face in the world by using education to combat social issues,” Borchert added.

Robins joined suddenly, but he enjoyed it and thought it was thrilling. He knew teachers (Borchert and Ochs) already from previous schooling, and he thought of Liberty as a place he would love to work at. When a job opened up, he got a call needing of teacher very fast, and Robins jumped at the opportunity. Only having moved here a month and a half ago subbing around the area until his wife settled into a job, the whole thing seemed like a perfect fit.

Very interested in music and singing, Robins expressed his love for the choir program here at Liberty and experienced All-State choir when he was in high school.

He also writes musical theater and works with composers in Chicago, Philadelphia, and New York. He hopes to get involved in theater at Liberty, as it is one of his passions.

“I like to teach theater [because] it is a very human process in the same way that all art teaching is very human,” he expressed.

Robins also has a passion for teaching and the younger generation that steps into his classroom each day.

“Students are so great, still developing and changing all the time,” Robins continued.

“Teaching is the purest form of humanity, the thing that separates us from all other creatures. Every generation of a wolf is more or less like the one who came before it, and just like that humans change more quickly because the knowledge we amass is passed on through teaching,” Robins said, “and that’s the crux of what humanity is.”

He started as a music education and composition major in college but enjoyed more reading and English. The more he read, he realized his love for teaching.

“The act of reading and reading well was so visceral. I spent a lot of time thinking about learning,” Robins explains.

“When I first started English, I thought it was the most exciting thing. Every time I went to class I felt smarter and nicer, like I was learning how to be a thoughtful person,” Robins said.

Coming from the University of Iowa, Robins student-taught at City High School and landed his first job in Grinnell, Iowa before he moved back to the Iowa City area and eventually came to Liberty.

Although sometimes missing his former Grinnell students, Robins has enjoyed Liberty and the upsides that it has brought. He expresses his love his students and also the faculty and environment that Liberty brings; feeling welcomed by his fellow co-workers. His love for students is evident in the way he is passionate about teaching them  and how he cares for them. So far, Robins has adjusted well to the new position and is already making an impact on students.