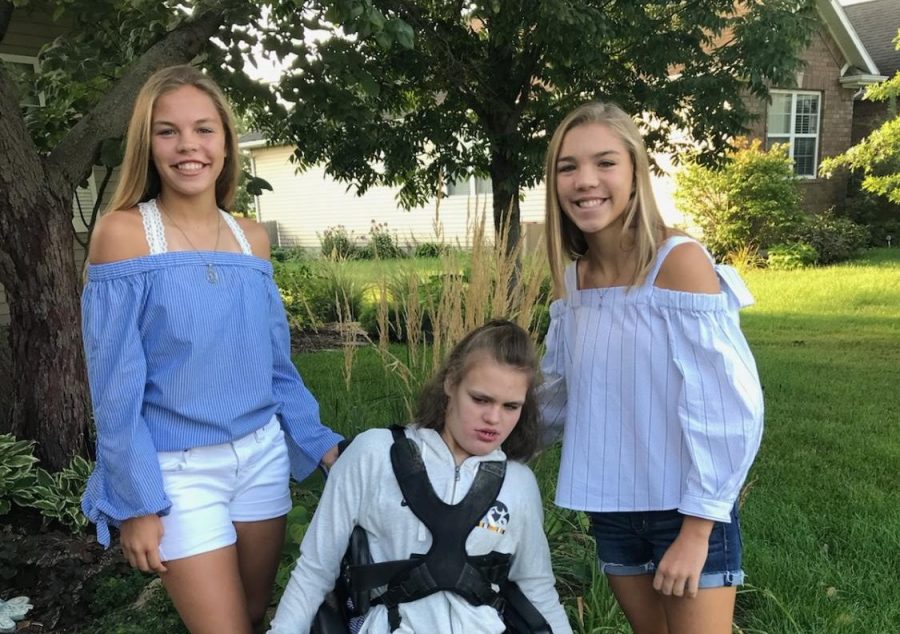 Gabbie, Maddie, and Carlie Schroeder pose in the outdoors, all wearing blue and white.

A rough entrance into the world is an understatement for Maddie Schroeder, senior, and her twin Alexis. Most students may not know Maddie by name or her story, but could recognize her in the hallway. Maddie gets around in her wheelchair and passers by can hear many fellow students telling Maddie hello.

On Dec. 7, 2002, Jill Schroeder was fighting for her own life while giving birth to twins 14 weeks premature. Jill’s uterus tore and she was internally bleeding. The twins were born in the operating room. Maddie only weighed a pound, ten ounces along with having severe brain injuries.

“The stress of my surgery and the large amount of blood that I lost likely caused [Maddie and Alexis’] brain injuries,” said Jill.

Alexis had a grade four intraventricular hemorrhage, meaning she had severe bleeding inside the ventricles of her brain. Ventricles are the communication network of cavities filled with cerebrospinal fluid. Alexis lived for ten days.

Maddie’s brain injury caused her to have cerebral palsy. Cerebral palsy is a group of disorders that affect muscle tone and posture. She has a very abnormal walking gait, difficulty with fine motor skills, poor coordination, scissoring legs, and abnormal limb movements. She also struggles to swallow, resulting in only being fed through a feeding tube.

Along with physical disabilities, she also has a severe learning disability. Maddie’s optic nerve is damaged, making it difficult for her to process things she sees. Her brain injury has also affected her ability to speak and communicate.

Being born in the second trimester of pregnancy resulted in her brain not developing fully. In the third trimester of pregnancy, motor control is developed along with the cerebral cortex. The cerebral cortex is the outer layer of the brain that controls sight, hearing, smell, sensation, along with higher controls including speech, thinking, and memory.

Along with Maddie’s brain injury, she contracted respiratory syncytial virus, most commonly referred to as RSV. RSV is a very serious respiratory illness. It can impact any part of the respiratory tract causing intense inflammation. In addition, it can cause infection in the rest of the lungs. Each year in the United States, among children five and younger, there are 2.1 million outpatient visits according to the Center for Disease Control and Prevention. For premature babies, RSV is very severe. It can cause chronic illnesses, heart conditions, and long term lung complications. In Maddie’s case, her lungs were very damaged, resulting in a lack of oxygen to her brain causing additional brain damage.

While overcoming a lot of medical issues, the Schroeder family has also had to overcome other challenges.

“Maddie has dramatically changed my life. I quit my teaching and coaching job after she was born to take care of her. She requires constant supervision and needs help with all activities,” said Jill.

When Jill is not around to help Maddie, the rest of the Schroeder family is required to step up and help. Maddie needs assistance doing everyday tasks herself, including feeding, dressing, bathing, getting around, and other things that most people take for granted.

“Maddie depends on us to feed her and keep her safe when my mom is not around. We help her open doors and wheel around. She can wheel around, but she might run over people or go down the stairs, so she has to be supervised at all times,” said Maddie’s sister Gabbie Schroeder, sophomore.

One of the biggest obstacles the family faces is Maddie’s lack of communication skills due to her underdeveloped brain. It is very challenging to understand her wants and needs.

“When she cries, we don’t know what is bothering her. She is not able to tell us what she wants,” said Maddie’s sister Carlie Schroeder, sophomore.

The family dynamic is different in the Schroeder household compared to the majority of families. Although Maddie is the oldest child, her brain injury caused developmental delays.

“Maddie is technically the oldest child, but because of her disability, her brain is less developed, which causes her to act younger than she is. If she didn’t have her disability, she would be getting ready to go to college. We could share clothes and ask her for advice,” explained Gabbie.

The family cannot ride airplanes, go to the beach, hike, zipline, sled, or participate in outdoor activities on rough terrain due to Maddie’s wheelchair. However, they are able to do other fun activities as a family.

In terms of Carlie and Gabbie’s school lives, not much is affected. Maddie has paraeducators to help her. To become a paraeducator, training classes are required but there are different levels. Here at Liberty, all of the paras are the highest level, meaning they can deal with bodily fluids, according to Kim Cranston, Student Support Services.

Maddie may bring many obstacles but she has made a large impact on the Schroeder family outlook on life and has developed them into the people they are today.

“Maddie has made us more accepting of people who have disabilities. She has taught us patience and empathy. She has to struggle to do things that we take for granted. Maddie has made us realize how thankful we are and to not take anything for granted and has opened our eyes to all the opportunities we have in our lives and that each day is a blessing,” said Maddie’s sisters.

Although Maddie may struggle to communicate, she likes to be talked to and interacted with. She may not be able to respond, but she understands the majority of the time. She enjoys music, movement, using switches, and simply giving and receiving high fives.