Stella Warren, senior, has been rowing competitively for three years. Next fall, she will attend the University of Kansas to pursue her rowing career. 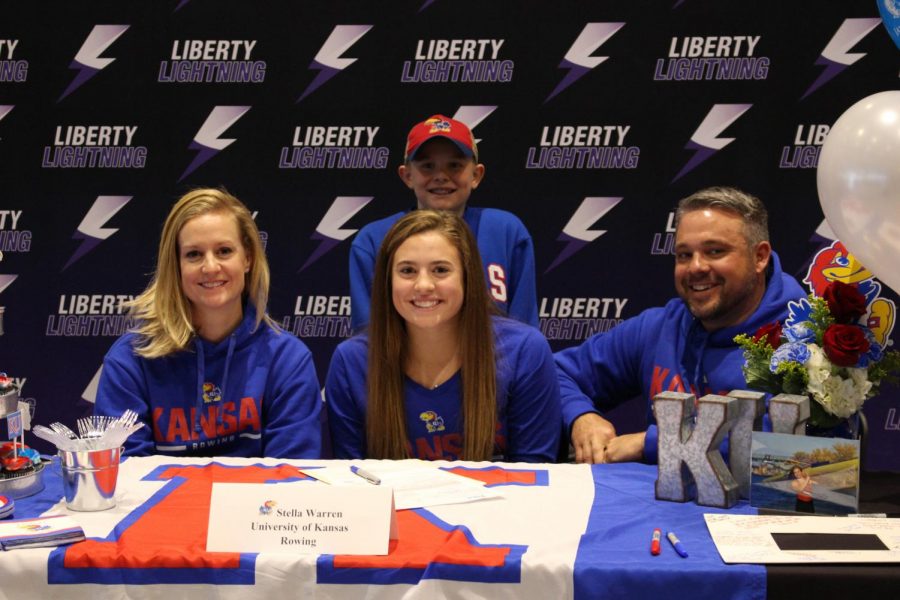 Stella Warren signing her Letter of Intent with her parents and little brother.

Stella Warren, senior, has been rowing competitively for three years. Warren likes rowing because of the mental and physical challenge it gives her. She currently rows for Y Quad Cities Rowing. The Y Quad Cities Rowing team is made up of students all across the Quad Cities who work together to compete nationally and internationally. The team has won numerous championship titles and first place ribbons over the past few years.

“Stella is super competitive and she is also really good at encouraging others. I know that if I am in the boat with her, it will go fast and she is going to do all she can,” said teammate Ella Saunders, junior.

Next fall, Warren, will be attending The University of Kansas to further pursue rowing. Practice starts at the end of August. She is excited to move away and become more independent. Over the last few years, she has been working hard to become an official collegiate athlete, and she couldn’t be more ready.

Warren has been through a lot with her recruiting process. The process is very long and stressful. Once coaches reached out to Warren, she would look at their school and program then decide if she wanted to stay in touch with them.

“I chose the University of Kansas because I had an instant feeling that that was where I was supposed to be. It felt like home right away. I got along with the team really well, and it also has a really good program for what I want to study!” said Warren.

Rowing is a physically and mentally demanding sport. Rowing is a very intense and demanding sport.  It takes a lot of hard work and determination to become a good rower. Warren’s team practices year-round, six days a week and twice a day. During every workout Warren strives to achieve a new personal record, which challenges her both physically and mentally.

“Rowing is not like any other sport because it is so challenging and it takes a lot of love for the sport to keep going,” said Warren.