The ICCSD announced on Monday, March 16 that schools will be closed through April 12 due to recommendation from Iowa governor Kim Reynolds. 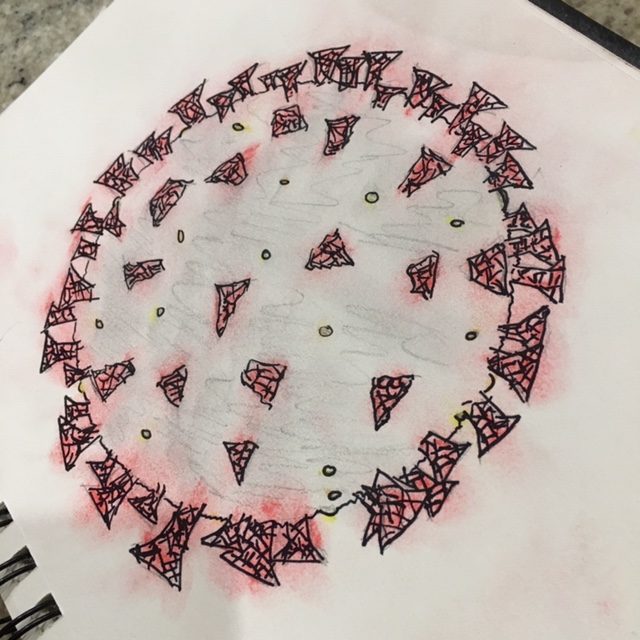 Using chalk pastel, this is a rough sketch of the COVID-19 virus.

On March 16, Director of Community Relations of the Iowa City School District (ICCSD) Kristin Pederson sent an email to staff and families, closing school for four weeks because of concerns due to the COVID-19 (coronavirus).

“As a district, we will follow Governor Reynolds’ recommendation and our schools will be closed until Monday, April 13, 2020,” the email read.

After this announcement, the Iowa Legislature agreed to waive the requirement that schools need to reschedule the missed days with Governor Reynolds saying that she will sign the bill. This comes after Gov. Reynolds recommended that schools close for four weeks on Sunday, March 15.

“Based on new information today from the Iowa Department of Public Health, now is the time to move to the next level of response,” Gov. Reynolds said. “I am now recommending that all Iowa schools close for a period of four weeks to help mitigate the spread of COVID-19.”

Basic preventative measures to combat the spread include social distancing, hand washing, and coughing into one’s elbow, as said by the Director General of the World Health Organization.

As of March 16, Iowa has 23 confirmed cases of COVID-19 with 15 cases being in Johnson County. In the United States and three U.S. territories, at least 4,312 cases have been confirmed and at least 79 patients have died due to the virus.

The story is ongoing.