A Strong Volleyball Team Isn’t Fazed by the COVID Stoppage

The Liberty High Volleyball team looks to return to state but the COVID break is trying to get in the way. 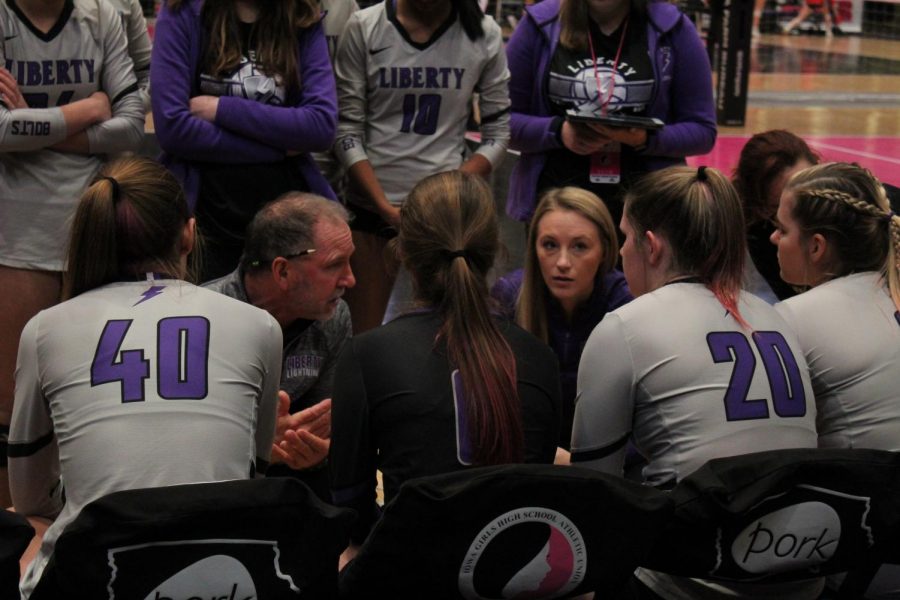 Liberty coaches Randy Dolson and Allie Kelly talk to the team during a time out at the state tournement in 2019.

As COVID-19 delayed the start of the school year, athletic activities across the school district were postponed as well. Football, volleyball, swimming and diving, golf, and cross country were all shutdown until students where headed back to school buildings for face-to-face learning. All Liberty teams struggled with this, but many volleyball players and fans would argue the stoppage of play impacted their team the most.

The returning state qualifiers came into this season with something to prove. Last season, the varsity team had 32 wins and only 2 losses. Heading into the state tournament as the two-seed, Liberty was unfortunately upset in the first round by Pleasant Valley. With most of the starting lineup returning this year, the team looks to get back to the state tournament and leave it all on the court.

On July 30th, Governor Kim Reyolds announced that if a county had above a 15 percent COVID positivity rate, the school district in that county could go to all online classes for a period of two weeks. Until the district goes back to school in person, at least with a hybrid schedule, all athletics during that period were to be postponed. Governor Reynolds stated that if a school district decided to go all online, then allowing student athletes to compete was out of the question.

Before the season was suspended, the Liberty volleyball team had already played two matches. On September 1st, they demolished rival City High School 3 sets to 0. But a few days later, they traveled to play Dowling Catholic. The ladies fought hard, but ultimately got beat 3 sets to 1.

On Tuesday, September 8th, word was received that every sports team around the school district would be halted. The news of the postponement resulted in protests from student athletes at all three Iowa City high schools: City High, West High, and Liberty High.

Hailey Hested, senior, was frustrated with the stoppage of play initially.

Hested stated, “At first I was definitely upset, especially [because] it’s my senior year, and I was worried I wasn’t going to be able to play with my friends again. But once I figured out more of what was going on, I relaxed a little more because I knew we would be back at some point.”

During the break, athletes needed to stay active and ready for when they could return to practice and once again compete. The team was not allowed to use any of Liberty’s facilities, but to keep on practicing, families of the players pitched in to rent out gyms for the team to practice. Coaches were not allowed to be at these practices, so they were run by parents and upperclassmen on the team.

Besides the practices, some members of the team also went to Strenght U, a sports performance and training facility to work out and stay in tip-top shape. At Strength U, they focused on staying in shape while also working on improving their physical attributes.

Hested being one of the team captains for the 2020 season has a big responsibility, even when there is not a global pandemic.

“[Being a team captain] is definitely more involved [this year] especially with being off for the last two weeks because we had to keep everyone together as a team and schedule gym times for ourselves since we didn’t have the school facilities,” she stated.

Allie Kelly, varsity assistant coach, said that with not being allowed to be in the gym with the team, Kelly and head coach Randy Dolson, had to find ways to keep in touch with the team.

“Us coaches and our players were able to communicate via zoom two or three times over our time apart. In these Zoom meetings, we used the time to check-in and reconnect with each other about school and life, as well as share positives. Mostly it was just to bond and keep everyone’s spirits up!” Kelly said.

Kelly also stated that nearing the end of the season, she was very proud of the girls for getting ahead in the classroom so that their academics would not add any additional stress to the situation.

Fall sports were allowed to resume on Saturday, September 26th. Liberty volleyball hosted a tournament that very day. Our team took great advantage of playing on our home court. Liberty cleaned the court against Solon, rival West High, Center Point-Urbana, and Clinton. The girls did not lose a single set that Saturday.

For some observers, an explosive, undefeated day would be surprising for a team that was sidelined for a couple of weeks. The team, however, the team was ready and excited to return to play.

Mariah Rollins, freshmen, was also not surprised by the success as she commented, “The whole team was working hard in the weeks we were off, and we are a strong team.”

“It was great to be back on Saturday! I know that our girls were very happy to be back with their teammates and grateful to be back playing the game they love. With that as their focus, and with their commitment to stay connected and focused during our time apart, none of us were surprised that we were able to pick up our level of play right where we left off. We are excited to keep getting better together the rest of the season!” Kelly commented.

With a win Tuesday, September 29th, against Prairie and another win over Washington on Thursday, October 1st, the Bolts now have seven wins and one loss. Liberty is on track to return to the State Tournament, but another halt in the season could severely hurt their chances. The team is dedicated to wearing masks and constantly sanitizing whenever possible. Built from nothing, the volleyball team made it to state in their first three years of being a program and they look to repeat that history again this season.