Since the first outbreak of the novel Coronavirus, there has been an increase in violence and harassment against the Asian American and Pacific Islander community. Students here at Liberty share their experiences as members of the AAPI community. 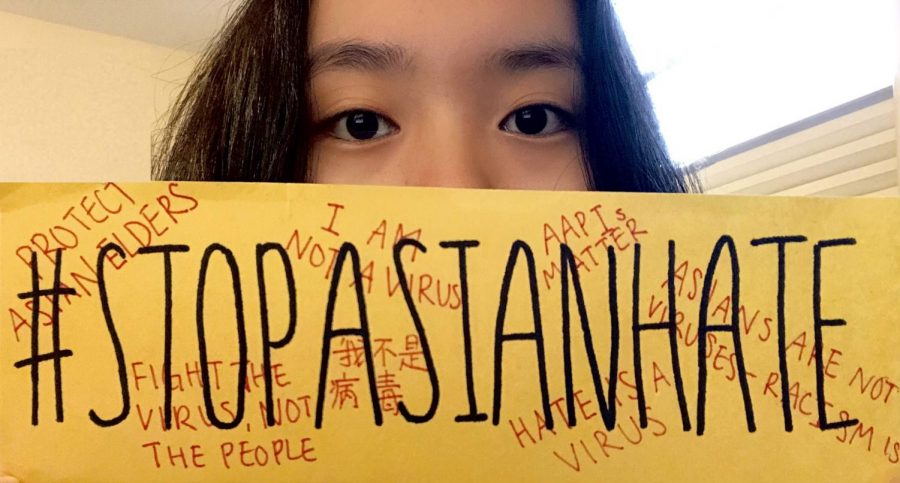 Jennifer Ho, junior, is passionate about speaking out against AAPI hate and violence against the AAPI community.

In January and February of 2021 alone, there have been 503 reported incidents of discrimination aganist the Asian American and Pacific Islander community in the United States.

Asian Americans and Pacific Islanders (AAPI) are often looked over in advocacy for equality. Their unique set of stereotypes as a “model minority” often makes them invisible when it comes to discussions of race and prejudice in America. However, with the novel Coronavirus outbreak in early 2020, instances of discrimination against AAPI, especially verbal harassment and shunning, has seen a sharp (about 46.2%) increase.

Being the “model minority”
The term “model minority” was first introduced in the 1960s in order to create a divide between “racial minorities and to downplay the role of racism in the inequities of American society,” according to Richard Lee, a professor at the University of Minnesota. Though the stereotype has a seemingly good connotation, being a “model minority” still perpetuates the idea of not belonging in America and being considered “less than” white people.

“Everything we do is under the stereotype, and we have to live up to it or we’re not considered good enough,” explained Jennifer Ho, junior. “There’s been this long history of… ‘they’re not good enough to assimilate but they’re better than all the other racial groups’.”

According to the University of Texas, being the “model minority” is the expectation placed on AAPI that they must be smart, self-reliant, obedient, wealthy, among other characteristics. The accepted role in society is used to compare AAPI to African Americans and other racial groups. Using the term “model minority” creates a guise of a compliment while demeaning those who don’t fit into the expected role.

“I have been told countless times to not make a fuss, keep my head down, and work hard because ‘that is what Asian people do’. When encountering racism or other challenges, I was taught to be non confrontational/passive, to ignore it, and to move on,” said Grace Wang, sophomore. “The model minority stereotype has largely contributed to the expectation that Asian people must excel at school, both within the Asian community and outside it. Thus, achievements are often downplayed and shortcomings are emphasized.”

Ho echoed these sentiments saying, “I’ve been brought up with my parents telling me that I am not to oppose white people and to let them have their way because I need to ensure that I’m on their good side. . . It’s almost a necessity for me to receive good grades and to try and prove to others that I’m worth their attention and interest.”

The pressure to be this “perfect” minority has taken its toll on members in the AAPI community.

“To me, the term ‘model minority’ is a suffocating ideology that crushes the humanity of AAPI,” Ho said. “We aren’t able to have our own choices and ideologies– thus removing the humanity in us altogether.”
Since COVID-19
Since the Coronavirus outbreak, 31% of Asian adults have reported being the subject of racial slurs or “jokes” about their ethnicity, according to a Pew Research Center survey. In the same survey, about four-in-ten Asian adults said someone has acted uncomfortable around them because of their ethnicity since the outbreak.

The Iowa Community School District (ICCSD) isn’t immune to this issue either.

“Ever since COVID-19 began, I’ve experienced more verbal harassment,” Ho said, who is Chinese American. “I had a classmate who mentioned that ‘bombing China and all Chinese people will stop Covid because all the Chinese will be dead so therefore there cannot be any spread’. . . Other students have not gone to such extremes, but even just yelling ‘CORONA, CHINA VIRUS, or KUNG FLU’ down the hallway or at me when I walk by….  is still pretty racist if you ask me.”

Wang shared that she had not “experienced too much of an increase in racism since Covid started, perhaps a few bat jokes every so often and a couple ‘China-virus’ messages, but nothing as extreme as what many other AAPI have faced.”

The Coronavirus also exacerbated pre-existing stereotypes, such as eating certain foods or being “exotic”.

“Covid has definitely caused the ‘exotic’ stereotype to grow. I believe this is mainly due to the fact that it has been speculated to have come from a Chinese person eating a bat, and although this theory is unproven and very unlikely, it has fed into the stereotype that Chinese people, and other AAPI, eat ‘strange/disgusting things’ and are uncivilized,” explained Wang. “It has also caused an increase in the ‘unclean’ stereotype, as many people incorrectly believe that all (East) Asian people carry the virus or will pass the virus to them.”

One major point that both Wang and Ho shared was that COVID-19 has caused them to be more cautious and, at times, scared to be proud of who they are due to the increase of violence and harassment.

“I am scared of telling people that I’m Chinese. Scared of speaking to my parents in my native tongue in public. Scared to walk by groups of ‘stereotypical racist white people’ in fear that I’ll get beat up like how AAPI elders are treated,” Ho said. “For the past year, I have never truly felt safe while walking out in public with my parents or friends. After returning to school, I have never truly felt welcome. Yes, I have friends and teachers who care for me, but the school’s atmosphere is tense.”

Even without COVID-19, the ICCSD has struggled with AAPI diversity and representation with only 5.8% of students in the 2019-2020 school year being AAPI.

“I feel that [the] district doesn’t make a huge effort to have Asian representation, but [it’s] also not completely nonexistent,” explained Wang.

“During my [seven] years in the ICCSD, there has not been a single school year where I’ve felt comfortable being Asian. There’s always been the constant fear of being mocked and verbally harassed,” shared Ho. “I’ve never felt like AAPI have been represented in the community or school district. In any activity that the ICCSD holds, it always seems like AAPI are just put on the side as an accessory piece. It seems as though we are not important, and we are just there to prevent any controversy. I rarely see AAPI staff or invited guest speakers who look like me.”

Ho and Wang suggested steps that the ICCSD could take to help the AAPI community be uplifted in the school district.

“I think that the ICCSD can try and raise awareness and be more on the lookout– in regards to hate. The ICCSD has yet to make a statement about such issues and even voice their support for the AAPI in our communities,” commented Ho. “It’s also important to educate the school district about the influential AAPI in our communities.”

An email was sent to parents and staff on March 18 from Matt Degner, the superintendent of the ICCSD, expressing support for the AAPI community in the ICCSD.

“Our District stands with those speaking out against and condemning the physical violence and verbal abuse directed at the Asian American and Pacific Islander (AAPI) community.  As a District, it is important to use our voice, our actions, and our resources to ensure all lives are treated with respect and love,” the email read.

Wang agreed with Ho, adding, “I think just talking about AAPI experiences more in classrooms, especially those that talk about US history, would be super great. AAPI have so much history in the US and it’s usually glossed over very quickly, so more of a focus on that would be super cool.”