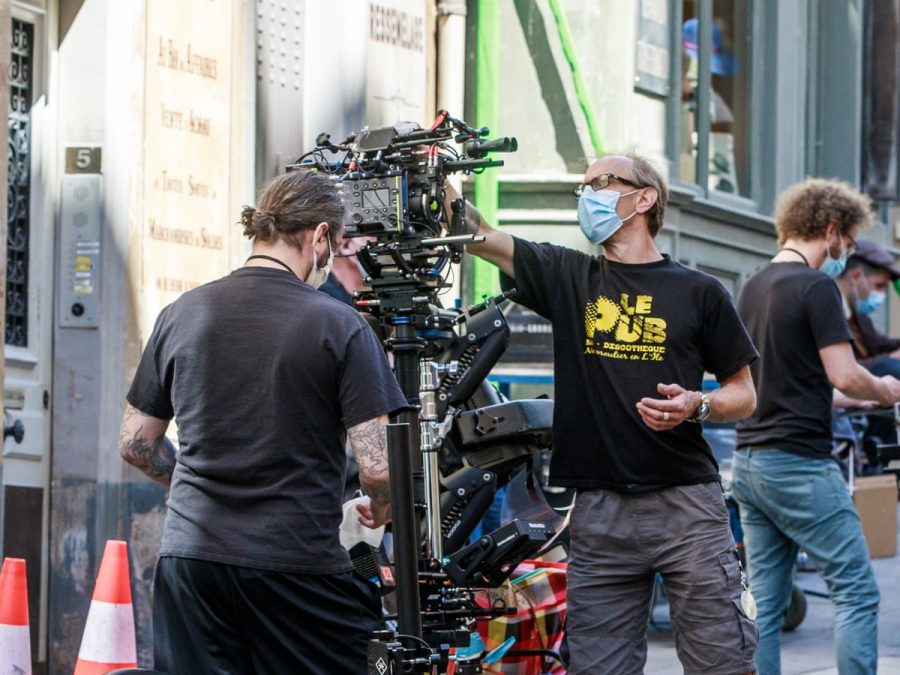 Film makers working despite the pandemic to ensure that film production continued.

Like a lot of industries, COVID-19 has affected how the film industry works. However, actors and everyone behind the scenes persevered to give us entertainment. Arin Bedingfield and I will be reviewing movies that were made and/or released during the pandemic.

Like a lot of people during quarantine, I watched movies to escape from what was happening in the world. Watching a movie over and over again, or discovering a new movie, is like free therapy (except for the $17.99 monthly Netflix subscription). Unfortunately for the film industry, many productions had to be postponed, but that didn’t stop them from creating stories for us to enjoy.

Nora Yates, North Liberty resident, is featured in films such as ‘No Place Like Dome’ and ‘Turning Point’, which are currently in post-production. Her experience with trying to get into the film industry during the pandemic has had its ups and downs.

Nora is based in Chicago and LA, however, due to travel restrictions, many casting directors had to resort to doing castings from self-recorded tapes and Zoom. However, for Yates, this benefitted her.

“I didn’t have to fly out every time [I had an audition],” said Yates.

On the other hand, it was harder for the casting directors to see your personality when you’re not right in front of them.

“The directors want to know if you’ll be a good person to work with,” said Yates.

“Sarah Cooper: Everything’s Fine” is a film that was made during the COVID-19 pandemic. Due to safety concerns and California state laws, there were many obstacles along the way.  It stars Sarah Cooper, who was discovered from her Tiktoks where she imitates Donald Trump’s speeches. Being a political satire film, it was a race against the clock to get it out before the election.

Arin Bedingfield, junior, runs an Instagram account dedicated to reviewing movies and she kept up with these reviews during the pandemic. (@arinsmovietheater.)

I was really excited to see this film. It had many celebrity cameos such as Megan Thee Stallion, Whoopi Goldberg, and many others. After I watched the film, I realized that all of the cameos are a delusion to the fact that not only was it unfunny, but it was cringy. The moments where they lip-synced to the politicians they were portraying, I literally couldn’t even get through it; I think it might just be my sense of humor though. On the other hand, I had a laugh at the ‘Mr. Pillow’ scene, which gets one star. The other two stars are for the celebrity cameos.

Bedingfield seemed to enjoy the film more. She noticed how they presented the political issues. We note different moments of the movie that we liked.

“This was definitely an interesting special. ‘Sarah Cooper’s Everything’s Fine’ follows Sarah Cooper as a news anchor going through a series of interviews while believing that ‘everything’s fine’. This special made light of serious and relevant issues in a funny, light hearted, and on brand way. For example, the “Karen” that was racially profiling Sarah on her own show, or the weather lady having a mental breakdown over global warming. Both of these were really creative ways to show the seriousness of these problems in ways that people would want to watch,” said Bedingfield

“He’s All That” is a movie that was released during the COVID-19 pandemic. Switching the gender roles, this movie is a modern twist to the cult classic “She’s All That”.

To start off, the main character’s name is Padgett. This should tell you a lot about this movie. Even though this movie is directed by the same person as ‘Mean Girls’ and ‘Freaky Friday’, I had very low expectations for this movie. Netflix has a reputation for making bad rom-coms, and this movie is a prime example. There were a few parts where it was so ridiculous, that it actually made me laugh. For example, the dance battle scene. It’s also pretty obvious that this movie was made to make money. Every other scene has a close-up of the product, because of that, I recommend this movie for anyone who needs to go to the grocery store.

Bedingfield and I can both agree that this movie definitely had *interesting* highlights.

“To be honest I didn’t hate this movie as much as I thought I would, but it also wasn’t great. “He’s all that” follows influencer Padgett Sawyer who’s living a double life on and off of social media. After an online humiliation that leads to her losing millions of followers, she and her friend create a bet to make the biggest loser in school prom king. This movie is filled to the brim with emotionless acting, bad jokes and…. Kourtney Kardashian? Even though this movie had some bad parts, there were a few scenes I did enjoy. Him riding into prom on a horse and a fight scene in the middle of a ‘Great Gatsby’ themed party are definitely [the] top 2 funniest scenes in cinema history. The worst part was near the end of the movie, in the middle of her heartbreak and his betrayal, after the big turning point of the movie that introduced the central conflict, there was a dance battle. And it went on for a solid 3 minutes. It was unbearable. Other than that it was pretty enjoyable,” said Bedingfield.

Although COVID didn’t stop the film industry, it did create challenges that are still being faced today. As the world gets up and running, hopefully the movie making industry will return to normal with future projects.