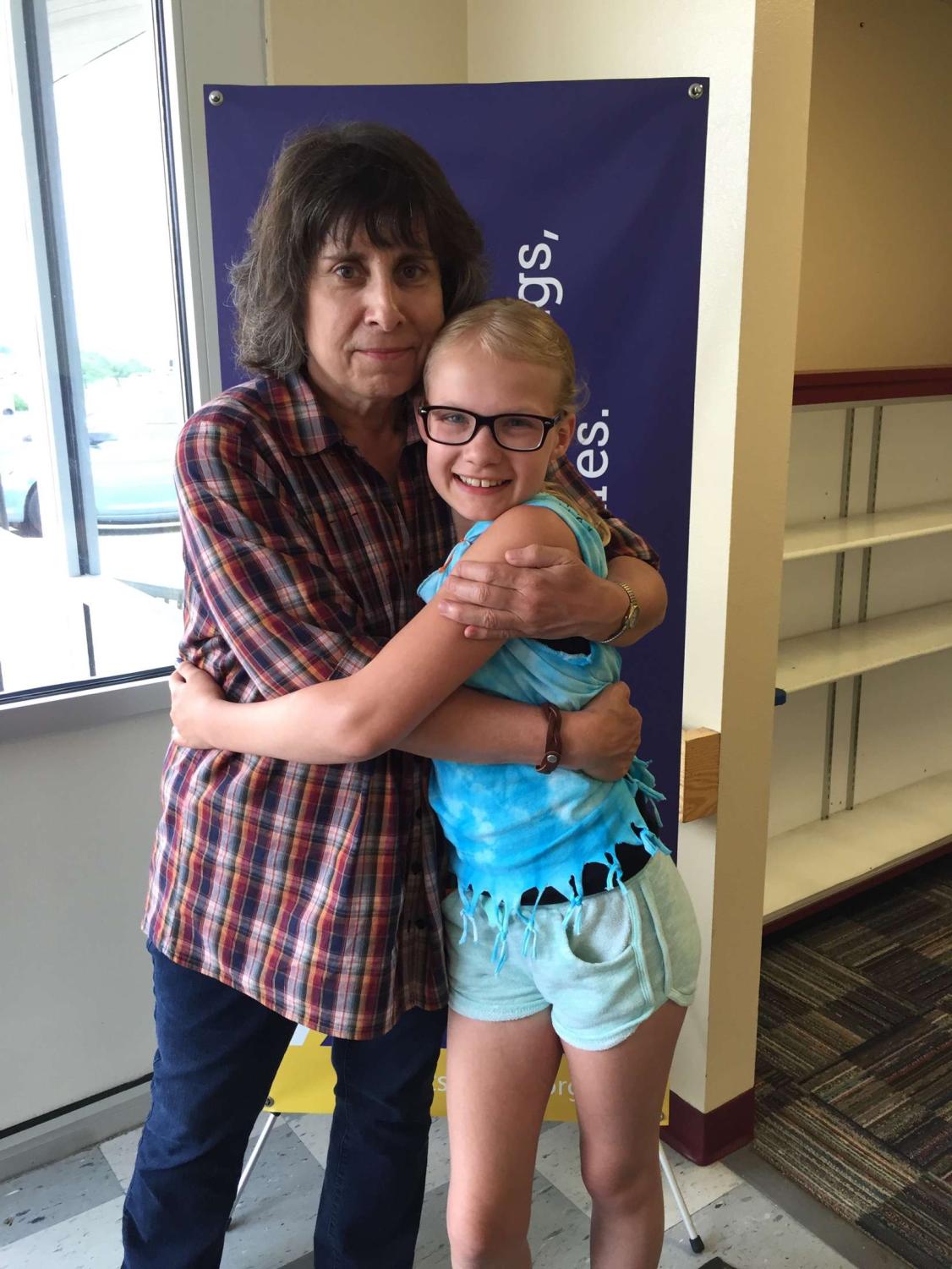 The Ability Behind Invisibility

Food allergies, mental illness, autoimmune disease, and learning disabilities. These life-altering illnesses all share a common factor: they are invisible to those who do not live with them. While it may seem easier to live with a disability when nobody can see it, it can cause feelings of isolation and helplessness.

Maddi Kain, senior, was diagnosed with dyslexia when she was in third grade. Dyslexia is a learning disability about decoding, a process that makes it difficult to identify speech sounds and connect those sounds to letters and words. This makes reading incredibly difficult for individuals with dyslexia. Kain started experiencing some telling symptoms around 7 years old.

“I would get really frustrated with reading, it was always [my] lowest score, I was always a grade behind in reading. My parents finally took me to get tested, and that’s when we found out,” said Kain.

The process of receiving a diagnosis is similar for many types of learning disabilities. For children, testing involves medical exams, accompanied by neurological and physiological testing.

“I went to [the testing center] 3 or 4 times. I would go into this room and they would give me tasks. There was like block memorization, reading phonics words and stuff like that, they’d have me reading words backwards. They also tested me for anxiety while doing that, because that was a very prominent thing that came with my dyslexia,” said Kain.

After the testing was complete, Kain was left in the dark about what was causing her hardships in school. It wasn’t until later that she found out the root cause of what made reading so difficult for her.

“I never really knew for sure, because my parents didn’t give me a for sure answer, but one time I walked in on my mom reading a book and it was called How to Help Your Child with Dyslexia, and that’s kind of when I found out…It was more that I was upset that I was struggling because I was very good at other subjects in school and I liked going to school, but the feeling of not being able to read or being as good as the other children… that was more frustrating than anything,” said Kain.

Though her feelings about the diagnosis itself faded, other emotions surrounding her disability have remained relevant throughout her life. These emotions have been provoked by comments and insults made both toward her, and about people with dyslexia in general. Kain said the worst comments came from someone who was supposed to be a helping figure in her life.

It was more that I was upset that I was struggling because I was very good at other subjects in school and I liked going to school, but [the feeling of not being able to read or being as good as the other children… that was more frustrating than anything.”

“My third-grade teacher technically bullied me when we told her I had dyslexia… She did not help me and essentially bullied me for not being able to keep up with the other kids. She would pull me aside in my own group and make me read to her, out loud, while all the other kids were silent. If I couldn’t read or do something correct she would get mad at me and tell me that I should be able to do this stuff, and if I’m not able to she will hold me back, to my face and to my parents,” said Kain.

After a difficult third-grade year, Kain’s family decided that her current school was not a healthy environment for her. They made the decision to switch Kain to Summit Schools in Cedar Rapids. Summit specializes in students with learning and multisensory disabilities by providing them with small class sizes and individualized instruction.

“I was in a classroom with 12 other students, I had the same teacher for fourth and fifth grade. It was [a lot of] hands-on learning, one-on-one time, which was very helpful for me. Each student in the class had their own specific curriculum that they followed… it was specific to what [I] needed to learn” said Kain.

Transferring to this school was one of many things that helped Kain work through her dyslexia. Summit Schools also provided Kain with extra tutoring, which she said was a vital part of learning how to read and write in a way that worked for her.

As she’s gotten older, Kain has found strategies to help her when she faces a problem.

“When I was younger, I didn’t really know how to work through the problems, but I went through a lot of tutoring. My mom tutored me, I had my fourth-grade teacher tutor me… I learned how to help myself through certain things like reading and spelling, which are my biggest struggles with [dyslexia]. Now I know if I don’t know how to spell something [I] put it in my phone and then see how it’s spelled, and then I’ll type it onto my computer,” said Kain.

Jaxon Davis, sophomore, has Attention deficit hyperactivity disorder (ADHD). In boys, ADHD presents heavily as hyperactivity. This leads to more boys receiving a diagnosis than girls. In contrast to dyslexia, there are more medical methods available to help people with ADHD.

“My symptoms have changed a little bit over the years, but not dramatically. I do take meds to help now,” said Davis

“It affects my school life more than my outside [life] because of how long I’m sitting down for. It’s hard to focus so I am usually blanking out or just not paying attention,” said Davis.

Davis has received a lot of support from his teachers to help keep him on track during class.

“My teachers support me in many different ways by giving me breaks, helping me focus, and much more,” said Davis.

Outside of school, Davis has found hobbies that allow him to be active.

“With my life outside [of school] I hang out with friends and skateboard where I’m constantly having fun and moving around so it helps a lot,” said Davis.

Though learning disabilities are the most well-known, autoimmune diseases play a large role in the community of invisible illnesses.

Ashlyn Keeney, senior, is known for her impressive track and cross country careers at Liberty. Keeney also struggles with celiac disease, an autoimmune disease that causes severe reactions to gluten intake. For people with celiac disease, intaking gluten causes serious damage to the small intestine, causing it to break down over time. In the short term, it can cause symptoms such as fatigue, stomach pain, vomiting, and problems with weight gain. Over time, more serious symptoms, like cancer, could be a result of continuous gluten intake.

Keeney was diagnosed in sixth grade after she was failing to gain weight or grow in the later elementary years.

“I wasn’t growing or gaining weight. I went to the doctor and they tested me for a whole bunch of things based [on] it, and [the test for celiac disease] came back positive… I was kind of sad about it for a while, but it could be way worse,” said Keeney.

Though there is no cure for celiac disease, maintaining a gluten-free diet prevents symptoms from arising. However, people with celiac disease have to take a lot of precautions to make sure no gluten is ingested.

“I do [eat at other people’s houses] especially if it’s people I trust or people that have made food for me before, I make sure they know I can’t have cross-contamination, they have to be really careful not to put a spoon in something with gluten and then put it in whatever they’re making my food with. I go out to eat but only at places that are well-reviewed… I have this app on my phone and people review places for celiac. At home, I have my own pasta strainer, because gluten is really sticky, and my own toaster. I have to be really careful and know the types of things I have to avoid,” said Keeney.

Keeney has made her mark at Liberty in the athletic department. Recently, she placed seventh at the state cross country meet and has had many more achievements in the previous 3 years. As an athlete, she needs to get in all of her nutrients, which is a struggle with celiac disease. She has had to learn how to make accommodations that support her performance.

“[Celiac] makes it hard when we’re traveling. I feel really bad because a lot of time we have to find a place I can eat. Normally, I would just get water or a salad, but before a meet, I need carbs and stuff. I have to pack a lot of my own food for meets. As an athlete, I’ve gotten pretty good at it since they’re coming out with gluten-free breads, I can get all the carbs and nutrients I need,” said Keeney.

Keeney’s illness is accompanied by serious, life-threatening side effects. While this may not be the case for Kain, she experiences a lot of social side effects to her disability.

“In a high school setting, a lot of people I know will make jokes about having dyslexia, and they don’t know that I have it. Stuff like that can be more annoying than it is hurtful. Also, when you tell them they will be like ‘well I didn’t mean it toward you’ but it’s like, you still said the comment like ‘oh you’re dyslexic, you’re stupid’… If they don’t know you have it, they’re less likely to censor themselves around you,” said Kain.

Davis said that he has never experienced any mean comments from anyone about his ADHD.

For Keeney, having a positive attitude about her illness makes it a lot easier to deal with the struggles that it brings.

“It sucks a little, because you see it, you smell it, you want it, but I’m just thankful it’s not worse. There are plenty of things I can eat, there are a lot of alternatives. Sacrificing a little bit sometimes, it’s not that big of a deal,” said Keeney.

Having an invisible illness causes many hardships, but Kain explained that it’s been a big source of the lessons that she’s learned in her life.

“I learned that if I wanted help I would have to ask for it, no one was going to give me the help that I needed unless I was the one who initiated it. That kind of helped me for my dyslexia and for life in general… They can’t help you if they can’t see it,” said Kain.