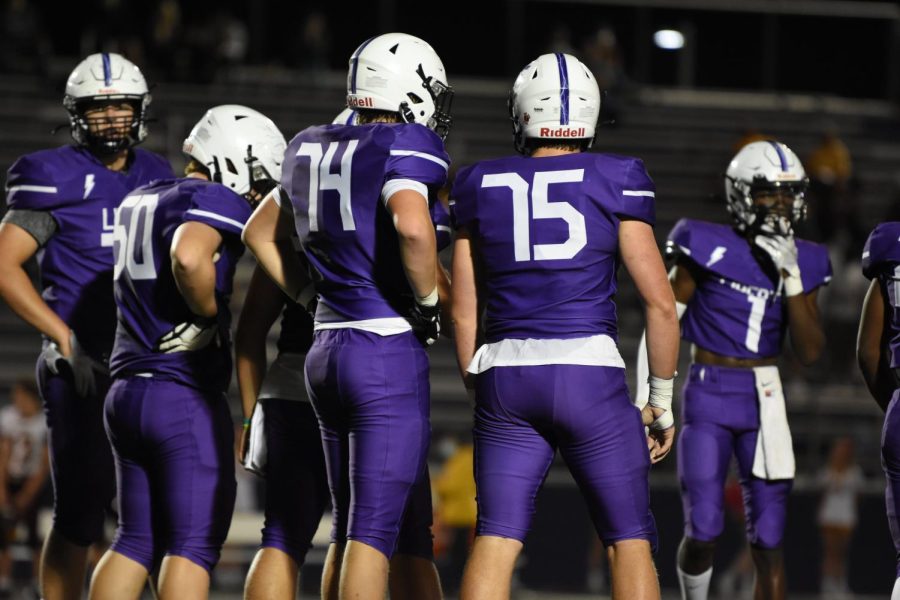 The Liberty Football team huddling up to decide their next plays.

Liberty Football kept their playoff hopes alive by beating the undefeated Fort Madison on the road on Friday, October 8.

After starting the season 0-5, Liberty playoff hopes were dim. The football team would need to win out their remaining four to have any chance of making the playoffs. After demolishing Mt. Pleasant last week, with this win, they are one step closer to a playoff berth.

Both teams got to work very early, as the score after the first quarter was 14-13 in Liberty’s favor. Jacob Adam, senior, had an interception early in the first, giving great field position to the Liberty offense. Darius Willis-Newell, senior, ran the ball in for a touchdown to give the Bolts a 7-0 lead. Fort Madison answered with two quick touchdowns of their own though. Willis-Newell ran the ball in once more for a touchdown in the quarter, giving the Bolts the 14-13 lead.

There was not a whole lot of action in the second quarter of the game. James McKinney, senior, threw a touchdown on a trick play to Christian Barney, junior, and Fort Madison kicked a field goal to make the score at halftime 21-16.

Defense was the clear theme during the second half. There was only one score in the third quarter, which was a field goal by Liberty’s Emerson Bennett, senior. The score following the third quarter was 24-16.

The impressive defense of both sides kept up for the fourth, as the 24-16 third quarter score would eventually wind up to be the final score of the contest. Liberty’s defense had many clutch stops in the fourth quarter. As Fort Madison turned the ball over on downs many times. Final score, 24-16, Liberty wins.

With the ball on the ground a lot, Tye Hughes finished with 57 passing yards and 8 rushing yards. McKinney threw a 33 yard touchdown on the trick play. Willis-Newell ran for a total of 159 rushing yards and two rushing touchdowns. Luke Meyers, senior, led the way on the receiving end with two catches for 40 yards. Jacob Adam had himself a day on defense finishing with seven total tackles, two solo tackles and an interception. Gage Gingerich, senior, added three solo tackles, a sack and two tackles for loss. Wyatt Williams, junior, and Meyers each had an interception and David Brusegaard, senior, had a fumble recovery. Emerson Bennett continued his streak of consecutively made kicks, making all three PATs and splitting the uprights on his lone field goal attempt.

Liberty, with two games left in the regular season, needs to win both to make the playoffs. They play Burlington at home this Friday, October 15, and then will cap off their regular season on the road against Clinton on October 22. 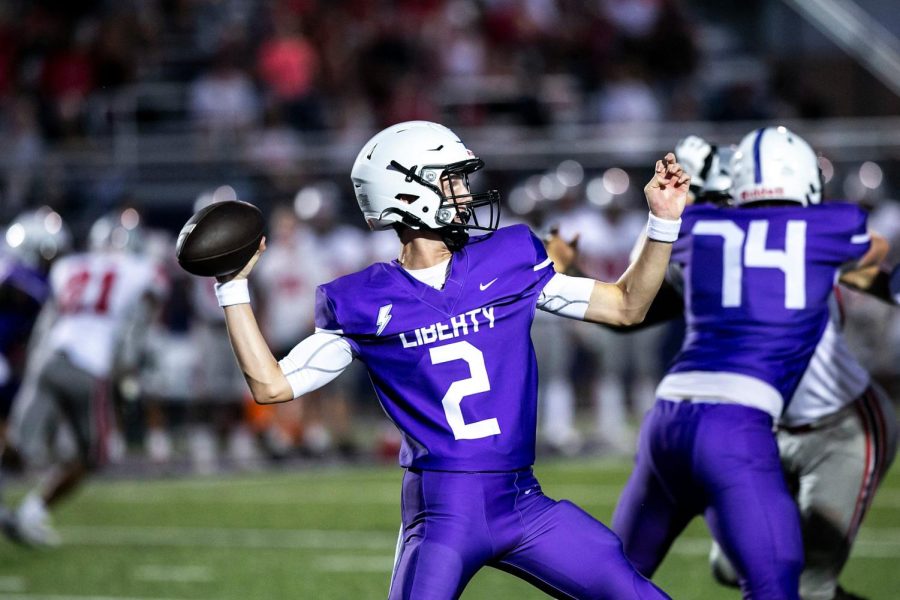 Tye Hughes, junior, at the first football game of the season.

Liberty football fans finally got something to cheer about last Friday night. The Bolts shutout Mt. Pleasant resulting in a final score of 56-0. The Bolts received their first win of the season, but more importantly, proved to everyone that they are much better than their record may suggest. The football team was just a play away from beating CCA, and held arguably the best team in the state, North Scott, to just twenty-one points.

The homecoming game for Liberty, the Bolts wasted no time getting to work. They scored two touchdowns in the first four minutes of the game. A third touchdown soon after made the score 21-0 after the first quarter. Nothing changed in the second quarter, as the bolts continued to put up points. Halftime score, 42-0. Coming out a little slow after half, neither team put up any points in the third quarter. The fourth quarter started with a bang, as Garrett Gregoire, junior, returned an interception for a touchdown putting the team up 49-0. One more touchdown in the fourth by Garrett’s twin brother Trey Gregoire made the final score a whopping 56-0.

Tye Hughes, junior, QB1, led the passing attack. He finished with a stat line of 88 passing yards, three passing touchdowns, twenty-two rushing yards and one rushing touchdown. Darius Willis-Newell, senior, ran through the Panther defense for 100 total yards and two touchdowns. Amari Thigpen, junior, Wyatt Williams, junior, and Luke Meyers, senior, each had a receiving touchdown. On the other side of the ball, Christian Barney, junior, and Gage Gingerich, senior, led the defense in tackles. Both players had four total tackles and three solo tackles. Gingerich had 2.5 tackles for loss. Emerson Bennett, senior, had the best stat line of the night. Bennett, Liberty’s kicker, went a perfect 8 for 8 on PAT’s. No field goal attempts on the night.

Even starting the season 0-5, Liberty is not out of the playoffs. They hope to finish their schedule undefeated and secure a spot in the postseason. Which, by watching Friday’s game, looks very do-able for the underrated Liberty Football team.

Luke Meyers said: “We needed to beat [Mt. Pleasant] if we wanted to keep our playoff hopes alive. We started the year with some tough opponents and I believe that has made us a better team. All we need to do now is take that experience and use it to win out the rest of the season.”