Mikey Gwenigale is a first generation American. He is Puerto Rican, Kenyan, and American. Mikey had the chance to visit Kenya, where his dad is from, to meet relatives that were previously strangers to him. 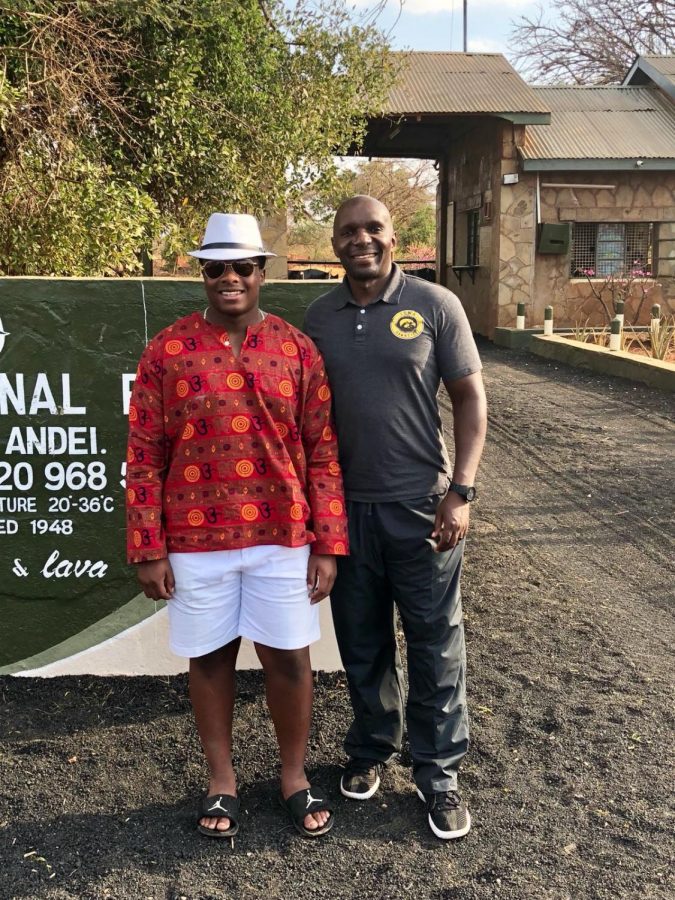 This past summer, Mikey Gwenigale, sophomore, anticipated the month of August would be jam-packed with preseason football practices and training.

However, it was replaced with a surprise trip to Kenya. While it was   originally planned for July, due to extenuating circumstances, the trip was pushed back to August.

Throughout the trip, Gwenigale was able to experience where his dad, Mike, was raised, and meet cousins and other extended family members he had never met before.

An excursion of this magnitude took an abundance of planning before stepping foot on the plane. First, the father/son duo had to make sure they were up to date on all immunizations recommended by the CDC.

Two weeks before leaving they had to start taking malaria medications which they continued taking during their entire stay. As they got closer to leaving, excitement built up in Gwenigale.

“I was really excited to see family because I have five cousins that are there,” said Gwenigale.

They had a thrilling month ahead of them and he was eager to make new memories, gain new experiences, and create new lifelong connections with family he had yet to meet.

Throughout the trip, missing preseason football stayed in the back of his mind. It was his sophomore season and a time to show his skills to the coaches, but he was missing his chance to do so.

Gweningale’s emotions towards the trip were mixed initially but once he stepped foot in Kenya, his mindset changed.

After 20 hours of travel for Gwenigale and Mike, they finally arrived in Kenya.

Happy to be at their final destination and close to family, they started their month-long vacation.

At first, Gwenigale experienced a bit of culture shock. Everything he read about Kenya was becoming reality; new people, new styles, and new forms of communication. All of it was hard to digest at first.

To top it off, Gwenigale is also a very picky eater according to both of his parents, so new foods were difficult for him to get used to. Carmen Gwenigale, his mom and Spanish teacher at Liberty, had tried to prepare him Kenyan dishes in the months before their trip so he knew what to expect.

However, the adjustments still proved to be challenging.

Gwenigale and Mike had other obstacles to overcome once they arrived. In Kenya, it can be difficult to access electricity, use the phone, find clean water and clean toilet facilities.

Things they took for granted in Iowa were now daily challenges. Apprehension of what to do if someone got sick was also in the back of their minds.

A reputable hospital was not always close by but after putting aside their worries and adjusting to the new culture, they were ready for adventure.

The first week they went on a safari to Tsavo National Park.

“This park is famous because of the man-eating lions during the construction of the Mombasa-Nairobi rail line,” said Mike.

The story of this National Park is represented in the movie The Ghosts and the Darkness. During this time, Gwenigale and Mike also visited the Kenyan coast.

Staying in resorts, going on safaris, and exploring new land was the “touristy” part of the vacation for them.

After their mini-vacation, they were able to spend time and reconnect with family.

During the last two weeks, Gwenigale and Mike stayed at Mike’s family farm. During this time Gwenigale was able to see the boarding school where Mike attended, when he was young, and the church where Mike was baptized.

It was a special time for both of them. Gwenigale now had images to place with stories he had heard growing up.

“Seeing the boarding school was really cool because my favorite animal is a monkey and they had monkeys there,” said Gwenigale. “They were just running around everywhere. I would totally like to come to Liberty if we had monkeys.”

This trip was a life-changing experience. He had grown up visiting Puerto Rico, where his mom is from, but in his 15 years, he had only heard of where his dad had grown up.

“Someday I would really like to go to Italy. My parents are taking a trip next year to Spain, London, and back to Kenya. I won’t be going on this one but maybe in the future,” stated Gwenigale.

“[My] goal is to get him to explore the world while we can offer it to him because we don’t know how many more opportunities he will have once he is done being in high school with us,” Carmen explained.

Learning about his culture has opened Gwenigales eyes to the world beyond Iowa and given him a sense of belonging to where his family originated from.